On 30 October 2022, hundreds of people standing on a cable suspension bridge over Machchhu River in Gujarat’s Morbi, felt a tremor underneath them. Suddenly, the bridge crumbled like a pack of cards, claiming more than 140 lives and injuring thousands. The tragedy exposed the trail of corruption where a watch-making company, Oreva (Ajanta group) with no experience or portfolio for construction had been awarded the contract for maintenance and operations of this bridge. The contract awarded by Morbi municipality to the company was worth 2 crore. It has now come to light that the company only spent Rs 12 lakh, or 6% of the allotted money for renovating the bridge.

This trail of corruption and criminal negligence is brings our attention to another criminal act that struck the nation in 2016—Demonetisation—which was claimed to be undertaken to weed out corruption (among many others evils). In a sudden move on  November 8, 2016 at 8.15 pm, Prime Minister Modi had announced the demonetisation (note bandi) of Rs. 1000 and Rs 500 notes. It was claimed that this move was targeted against black money, corruption and terrorism.

In effect, this move unleashed an economic war, the effects of which are still present, after six years. Indian economy is in recession, the cost of living is increased and inflation is skyrocketing. More than 200 people lost their lives in the wake of this announcement, trying to negotiate the sudden change. The government’s only response was to declare that, “ordinary citizens are always ready to make sacrifices and face difficulties for the benefit of the nation.” While the sacrifices were made by the ordinary citizens, there is no sign of the promised benefits. Instead, tragedies like that on Morbi bridge, which happened as a direct result of corruption, continue to unfold.

According to RBI’s own data in 2018, 99.3% of the demonetised banknotes, or Rs.15.3 trillion of the Rs.15.41 trillion that had been demonetised, were deposited with the banking system. That means almost all the money that was supposed to be in circulation or private hands came back. And, if this included any black money it would have all become white! The new notes have proved as vulnerable to counterfeits as their old avatars and the incidence of terrorism has certainly not gone down.

The Modi government also claimed that notebandi was a desirable step towards formalisation and a cashless economy. But ,as per the cash flow data, since 2016, there has been a steady increase in cash transactions and six years later, currency notes in circulation are 72 % higher than in November 2016, just before demonetisation. That is, the cash in circulation now, far exceeds, the levels before demonetisation.

In terms of the economy, the impact of demonetisation has pushed the country into a spiralling economic recession. Along with the new tax regime of GST, the demonetisation has led to the crushing disruption of agriculture and uprooting of micro and small scale enterprises. The impact was so severe, that despite the increase in cash flow today, the micro and small scale enterprises were never able to recover, with many closing down and rendering tens of thousands job-less. According to CMIE data more than 95 lakh jobs were lost during the immediate aftermath of the demonetisation. The unorganised sector, especially women were hit the hardest by the combined effect of demonetisation, GST and lockdown. According to reports, while only 19% of women remained employed, 47% had not returned to work till the end of 2020.

Just a year after the demonetisation, the richest 1% got much richer, much faster and their share in wealth increased from 58% in 2016 to 73% in 2017. At the same time in the same period, the income share of the poor rose by a meagre 1%.

We must understand that demonetisation has its root in the global capitalist system, with the international agencies like International Monetary Fund and the World Bank pushing for greater formalisation of the economy to ensure organised labour force utilisation for capitalist production and profit. In a report in 2021, the Centre for Financial Accountability (CFA) noted that the demonetisation idea had been aggressively pushed by the big capital through the Better than Cash Alliance funded by United States Agency for International Development (USAID), Bill and Melinda Gates Foundation, Citi Foundation, Ford Foundation, Mastercard, Omidyar Network and Visa Inc. This is an alliance that India joined exactly a year before demonetisation.

When he said ‘give me just 50 days and all your big notes and I shall give you freedom from black money’, his exhortation was a poor copy of the famous words by Netaji Subhas Chandra Bose: ‘give me blood and I shall give you freedom’. But six years later, the people remain devasted by the crippling effects of demonetisation, and feel cheated by the jumlas of the Modi government. 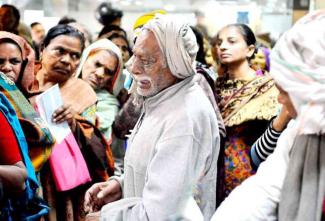