Even as Narendra Modi seeks to lure the electorate in election-bound Gujarat by conjuring dreams of mega investment and grand development, the collapse of a British era suspension bridge in Morbi which has taken a toll of at least 134 lives has exposed the sordid reality of the much trumpeted Gujarat model. Details emerging from the Morbi bridge tragedy point to a shocking pattern of governance – utterly inept and corrupt. Morbi-based wall clock making company Oreva was awarded the contract to repair and maintain the century-old suspension bridge. The contract which is valid till 1937 and allows the company to charge the public for using the bridge was finalised reportedly without any open tender. The company claimed to have completed renovation by spending 2 crore rupees in just a few months and the bridge was hurriedly reopened before the elections only to invite this disaster. The official narrative now seeks to blame overcrowding as the reason for the collapse, but let us not forget that people were allowed to access the bridge only after buying tickets.

Six years ago when a section of an under-construction flyover had crashed in Kolkata, Narendra Modi had immediately made it an election issue, calling the crash a message from God to the people of West Bengal to save West Bengal from the corrupt and inefficient rule of the TMC and bring the BJP to power. Will he now treat the Morbi bridge collapse as a divine message to save Gujarat from the corrupt crony rule of the BJP? The Oreva group, like most business groups in Gujarat are pretty close to the Modi-Shah duo and the FIR filed after the bridge collapse has already left the company out of the ambit of the case. In all likelihood, the case would now be sought to be hushed up by paying some token compensation to the victims and meting out punishment to a few ground-level employees. And the Morbi bridge collapse has already been erased from the public discourse by the dominant media.

The dream of ‘development’ in Modi’s poll campaign is always woven with the threads of hate and lies. The hate campaign in Gujarat this time is directed not just against Muslims but also against urban Naxals. Once again using the Narmada river project as a symbol of pride and abundant source of benefits for Gujarat, Modi blamed Medha Patkar as an urban Naxal for trying to stall development by foregrounding the issue of displacement. Carrying on from his ‘andolanjeevi’ diatribe delivered on the floor of parliament, Modi has now emphasised the need to uproot pen-wielding Naxals while addressing through videoconferencing a brainstorming session of Home Ministers. Defence of the Constitution and free speech, justice and human rights, environment conservation, rehabilitation of the displaced and dispossessed – the entire agenda of the democratic movement is now being identified as urban naxalism to be dealt with by invoking UAPA or similar draconian laws.

How should the opposition respond to a regime which unleashes such fascist offensive to hide its complete failure and betrayal in terms of addressing the basic needs of the people and upholding the basic tenets of rule of law? A decade ago, the Aam Aadmi Party emerged in Delhi against the backdrop of popular anti-corruption and anti-rape struggles in the concluding years of the UPA-II regime. In addition to Delhi, it has now managed to come to power in Punjab and is reportedly evoking considerable response in Gujarat. How should it respond when the rapists and murderers of Bilkis Bano and her family are set free and accorded a hero’s welcome on the 75th anniversary of the country’s independence and notorious rape convict Ram Raheem is granted forty days’ parole in Haryana just on the eve of Haryana’s three-phase panchayat elections?

Arvind Kejriwal has now come up with the most definitive answer to this question. He says India needs the blessings of the Hindu gods and goddesses to lift the country out of the present economic crisis and the best way to secure their blessings is print the images of Laxmi, the presumed goddess of prosperity, and Ganesha, the problem-solving god of wisdom, on India’s currency notes. With this one recommendation Kejriwal has made it clear that in spite of paying lip service to Bhagat Singh and Ambedkar, he is ready to bid goodbye to rationalism and embrace obscurantism in his battle against the BJP. Instead of holding the Modi government accountable for its sheer non-performance and divisive and hate-filled ideology, he would rather try and beat Narendra Modi in the game of absurd ideas and competitive emotional appeals to the religious faith of India’s majority religious community of Hindus. This political line is often described as soft Hindutva and sought to be defended in the name of its mass appeal and acceptance and legitimised by giving the example of Gandhi and his use of religious idioms and metaphors during India’s freedom movement.

Kejriwal will not be the first politician to try and adopt this strategy. Like Kejriwal, Rajiv Gandhi too had made his appearance in Indian politics with a clean and modern image and a forward-looking vision of a scientifically and technologically advanced twenty-first century India. In 1984 he became the prime minister of a government with the biggest parliamentary majority in India till date, when the BJP was reduced to just two seats in the Lok Sabha. But now he is remembered for having actually emboldened the BJP, first with his ill-advised move on the Shah Bano verdict and then the balancing act in Ayodhya. Even now some Congress leaders rush to acknowledge Rajiv Gandhi as the real architect of the Ram Mandir in Ayodhya. The attempt of Kejriwal to try and beat Narendra Modi on the turf of Hindutva is liable to meet with a similar fate.

It is not the appeal to religiosity that explains the BJP’s electoral success, it is the BJP’s ability to whip up a hate-filled anti-Muslim frenzy and assert this majoritarianism as nationalism that works for it. The answer to this hate and aggression lies in a decisive social and ideological counter-mobilisation, not in legitimising it through competition or complicity. Peddling religious symbols on currency notes as a solution to economic crisis, and that too with the portraits of two of modern India’s greatest visionaries hanging on the wall behind, will be remembered as the vintage Kejriwal moment of betrayal to the cause of modern India. 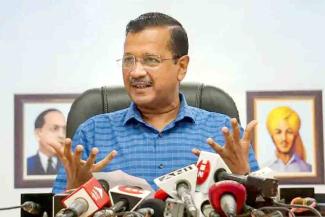