In one of his first messages to Narendra Modi, Rishi Sunak promised to deepen the ‘security, defence and economic partnership’ between UK and India, and on 16th November, as expected, after a meeting with Modi, he agreed 3000 visas to UK for Indian nationals. This is clearly a prelude to the signing of a trade deal which has been condemned by both British and Indian trade unions for its likely impact on labour rights. As the diplomatic relationship deepens, so apparently does Sunak’s personal closeness to the RSS. While in Britain he has gone out of his way to publicly promote his identity as primarily a devout Hindu, over and above any Indianness, recently his mother-in-law Sudha Murthy was caught on camera touching the feet of RSS activist Sambhaji Rao Bhide, one of the men booked for instigating violence in Bhima Koregaon in 2018.

But Sunak is not simply another Modi-loving UK politician, like MPs Barry Gardiner and Bob Blackman (Barry bhai and Bob bhai to their Sanghi constituents), both recipients of the Padma Shree. He is fascistic in his own right. As the richest man in the UK’s Parliament, twice as rich as King Charles, with an eye-wateringly expensive education in private schools followed by Oxford, and the investment bank and financial services company Goldman Sachs, he has imbibed the superiority of the upper echelons of British society with its sheer contempt for those without wealth and privilege.

He amassed enormous personal wealth during the financial crash, at a time when 300,000 people are estimated to have died in the UK as a result of the government’s austerity policies. As the UK’s Chancellor, he axed a £20-a-week increase to Universal Credit welfare benefits that had helped some of the poorest families through the pandemic. Just weeks before the cut was confirmed in July, he was busy planning a private swimming pool, gym and tennis court at the Yorkshire mansion which he and his wife, Akshata Murty, purchased for £1.5m in 2015. Akshata, of course, has substantial shares in Infosys, the corporate owned by her billionaire father Narayana Murthy, husband of Sudha.

As Adam Bychawski writes, the Sunaks’ Georgian mansion, where locals described attending parties with liveried staff pouring champagne from magnums, is not the only property they own. There is also the £7m, five-bedroom house in Kensington, west London; a flat, also in Kensington, that the couple reportedly keep “just for visiting relatives”; and an apartment in Santa Monica, California. Meanwhile the couple’s wealth was stashed away in the Cayman Islands.

No wonder then that Sunak boasted to his natural allies, the privileged upper-classes of Tunbridge Wells, that he was already in the process of taking away resources which the Labour party had allocated to the deprived inner city areas (a large proportion of whose residents are Asians) and diverting them to the  well-heeled residents of the leafy suburbs.

In fact while celebrated as the UK’s first Asian Prime Minister, and a symbol of the Conservative party’s ‘diversity’, Sunak is no friend of people of colour. He has promised to increase the racist and violent Stop and Search policies which target Black people and Muslims, and is happy to repeat the racist and far right rhetoric about Muslims grooming children, vowing to  ‘not going to let political correctness stand in the way’ . He has also promised to ‘refocus’ the PREVENT anti-extremism programme (discredited for its blatant Islamophobia) on ‘Islamic extremism’ and away from the far-right extremism which is a major threat in Britain while making ‘the vilification of the United Kingdom’ into an official definition of extremism.

On the question of refugees, not only has he embraced Priti Patel’s policy of sending refugees to a life-threatening existence in Rwanda, but has appointed the even more right-wing Suella Braverman as Home Secretary. In less than a month of her appointment Braverman has overseen developments more horrendous than anything Priti Patel could boast of - some 4000 asylum seekers including young children have been incarcerated at the Manston detention centre, in accommodation meant for 1600 people. Detainees are held in tents despite the bitingly cold weather. They have faced not only physical and sexual violence but outbreaks of norovirus, scabies and diphtheria. As Devyani Prabhat writes ‘the situation at Manston is not just dismal, it is a violation of legal requirements in international law, domestic law and the government’s own policies’

Through all this Sunak has defended Braverman or remained silent, even when, the day after a white supremacist bombed an immigration centre in Dover, Braverman chose to call the arrival of desperate and vulnerable asylum seekers an ‘invasion’. While this use of violent militaristic language against refugees is reminiscent of Amit Shah’s tirades against migrants, in Britain it is usually the preserve of white supremacists - Nigel Farage and those further to Farage’s right. Britain First, arguably the largest of Britain’s far right groups, for example, have been conducting beach ‘patrols’ in a so-called ‘Operation White Cliffs’ to turn away asylum seekers. Significantly, when Braverman finally deigned to visit Manston, a two-hour journey from London by car, she chose to travel in a Chinook army helicopter.

With his father in law’s corporate Infosys involved in  substantial investments in Israel which are co-directed by Uri Levine, formerly of Israeli Military Intelligence Unit 8200, Sunak makes no bones about his closeness to Israel. He supports the recognition of Jerusalem as the capital of Israel and has vowed to legislate against the Boycott, Divestment and Sanctions (BDS) movement.

Meanwhile, despite Biden’s recent attempts at détente with Xi, Sunak has proclaimed that China poses a systemic challenge to UK values and represents the “biggest state-based threat to our economic security”. Not surprisingly, the meeting with Xi at the G20 has been called off at short notice.

In future G20 meetings Rishi will have the company and guidance of his mother-in-law and other RSS friends, because in an astonishing move, the Modi regime has quietly appointed its own supporters to represent India’s ‘civil society’ during India’s incoming presidency of the G20, with anyone else who might represent civil society completely excluded. Modi’s so-called ‘civil society’ group is chaired by Amrithanandamayi, a godwoman who stands accused of shocking sexual and physical violence against disciples at her ashram, and includes Sudha Murthy and a number of prominent RSS leaders.

Back home in Britain, Rishi Sunak is likely to also give a boost to the attempts by the Hindu fascists to label any criticism of the Modi regime or its British branches as ‘Hinduphobia’. A trend over the last 15 years has been for the outposts of the Indian government to desperately try ‘to obscure’ the genocidal Hindutva policies of the Modi government; particularly as attention to this in the Western media and public sphere has gradually increased.

Hinduphobia has been  compared  to ‘White Lives Matter’, a white supremacist, racist response to the Black Lives Matter movement, which has grown into a neo-Nazi movement of its own. The key idea behind ‘Hinduphobia’ – that the Hindu majority in India are under systemic attack from minorities – is akin to this casting of white people in a Western context. Both are used as an excuse for, and in response to resistance against, racist and fascistic attacks on minority communities and marginalised people. Last month’s march through Leicester’s Asian communities by masked and armed Hindutva forces was aimed at provoking a response from Muslims in order to strengthen just this narrative of Hinduphobia Already since then, pro-Hindutva groups have been exposed sharing fake posters claiming to call on Muslims to violently protest outside a Hindu temple in Wembley, North London. No such protest was planned. With Sunak as Prime Minister these forces will be emboldened to whip up communal violence in other parts of the UK. It must be resisted. 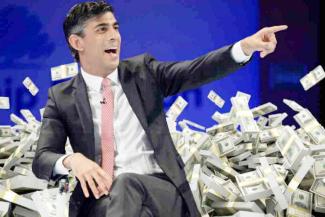