Fifty years have elapsed since the death of Comrade Charu Mazumdar in Kolkata's Lalbazar police lock-up. Back then, the Indian state must have heaved a huge sigh of relief, expecting his death to mark the end of the revolutionary wave that had spread across India in the wake of Naxalbari. But five decades later, when the Modi regime seeks to suppress every voice of dissent, it has to concoct the term 'urban naxal' to persecute dissent. Clearly, the spectre of Naxalbari and Charu Mazumdar continues to haunt India's rulers even five decades after his death.

When the peasant upsurge broke out in Naxalbari in May 1967, the Communist Party of China welcomed it as 'a peal of spring thunder crashing over the land of India'. The path of agrarian revolution visualised by Naxalbari was inspired considerably by the trajectory of the Chinese revolution. Charu Mazumdar, Naxalbari, and the CPI(ML) which was founded two years later, thus came to be bracketed with China, Chinese revolution and the Communist Party of China led by Mao Zedong. But in many ways Naxalbari and CPI(ML) carried the communist movement deeper into the social and historical soil of India. Naxalbari was a giant step forward towards what can be called Indianisation of Marxism, application of the universal revolutionary principles of Marxism to the specific conditions and context of India.

Naxalbari did not happen overnight. It had unmistakable deep roots in the history of India's peasant militancy and communist movement. Charu Mazumdar was one of the leading organisers of the historic Tebhaga movement - centring around the land and crop rights of the toiling peasant - of undivided Bengal and along with many communist leaders of that period he too was jailed when the Communist Party was banned in 1948. After coming out of jail, he returned to pick up the threads of the Tebhaga agitation in the North Bengal districts of Darjeeling and Jalpaiguri. It was this deep prolonged association with militant peasant movement since the Tebhaga days which guided Charu Mazumdar to envision the peasant upsurge in Naxalbari and direct it towards a broader agrarian revolution. The great debate in the international communist movement was for him not a question of just taking sides, but more importantly one of unleashing greater revolutionary dynamism in India's own arena of class struggle.

Many of India's early communist leaders had come from aristocratic backgrounds and got initiated into the communist ideology while studying abroad. Charu Mazumdar was schooled in a different tradition - he joined the communist stream of the freedom movement in undivided Bengal and devoted himself to organising the peasantry. When the peasant upsurge of Naxalbari triggered a great wave of revolutionary awakening among students, Charu Mazumdar was quick to call the students to go to villages and get integrated with the landless poor. He was actually revisiting the very path he himself had traversed during his youth. This was also Bhagat Singh's call to the youth - to reach out to the toilers and oppressed people of India.

In the wake of Naxalbari, communist revolutionaries across India felt the urge to coordinate on an all-India scale and subsequently to form a new communist party. While launching this new party, Charu Mazumdar was emphatic about its revolutionary inheritance. He saw the new party as the revolutionary stream of the Indian communist movement that would carry forward the legacy of the Kayyur and Punnapra-Vayalar uprisings of Kerala, the great Telangana movement of Andhra and the historic Tebhaga awakening of undivided Bengal. Naxalbari and CPI(ML) also inspired a new and deeper reading of India's anti-colonial resistance by bringing to the fore the history of the Adivasi revolts that pulsated with the unmistakable urge for freedom from foreign rule and signalled the beginnings of a great popular awakening in colonial India.

During the stormy phase of Naxalbari and its immediate aftermath, Charu Mazumdar and the founding generation of the Naxalbari-inspired revolutionary communist movement focused most of all on the advancement of peasant guerilla warfare. Consequently, elections came to be boycotted and everyday modes of mass organisation and economic struggle took a back seat. For Charu Mazumdar, this was very much an urgent specific response to an extraordinary situation, and not a new strategy for all times to come. Prior to Naxalbari, Charu Mazumdar never discarded the need for mass organisations and mass struggles and he himself had contested an Assembly by-election from Siliguri as a CPI(M) candidate.

In the face of the severe military crackdown unleashed by the Indian state and dramatic change in the political situation with Indira Gandhi consolidating her position following India's victory in the 1971 war and the popular support generated by her Garibi Hatao slogan and measures like bank nationalisation and abolition of privy purse, Charu Mazumdar in his last writings stressed the need to overcome the setback. Keeping the party alive by forging close links with the masses, upholding the interests of the people as the supreme intetests of the party, and seeking unity with the broad range of Left and fighting forces against the autocratic assault of the Indira government at the Centre and SS Ray regime in West Bengal - these were Charu Mazumdar's final words to his comrades.

It was this last call of Charu Mazumdar which inspired the regrouping of revolutionary communists in the arena of struggle. Riding on the boundless energy, intensity and courage of the upsurge of the oppressed rural poor in Bihar, the party central committee was reorganised on the second martyrdom anniversary of Comrade Charu Mazumdar. Inspiration and lessons drawn from the entire trajectory of the Naxalbari upsurge and the political journey of Comrade Charu Mazumdar enabled the reorganised CPI(ML) not just to withstand the Emergency-era repression and setback but spearhead a firm revival and expansion of the party unleashing a wide array of democratic initiatives and struggles.

Today as modern India faces its worst ever political calamity, the spirit, vision and wisdom of Charu Mazumdar have acquired a new relevance in the context of today's anti-fascist resistance. The suspension and suppression of democracy associated with the Emergency has today become so pervasive and permanent that a formal declaration of Emergency has become redundant. The character of the dominant media has been transformed so thoroughly and dramatically that media censorship too has become unnecessary. The executive today virtually commands the remaining three pillars of the Republic - the judiciary, legislature and the media, and the centralisation of power around the executive has completely upset whatever federal equilibrium we used to have.

This unbridled centralisation and concentration of power is accompanied by an unprecedented intensification of communal polarisation and massive spread of hate and lies. The social and cultural fabric of India has never faced such massive assault since the traumatic days of Partition. And playing tango with this vicious fascist aggression is relentless corporate plunder of the country's precious natural, infrastructural and human development resources. At stake are all the gains India made and the rights the Indian people achieved over the protracted phase of freedom movement and the seventy-five years of India's existence as a constitutional republic. Learning from Comrade Charu Mazumdar, once again we need to dig deep in our accumulated historical resources and unleash the revolutionary initiative and imagination of the people to foil the fascist design and usher in a new era of democratic resurgence. 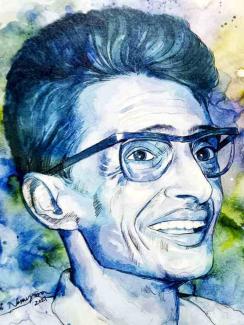