For years, under BJP-JD(U) rule, the people’s voices and their demands were in the back foot and ignored. The terror and repression of BJP’s bulldozer raj against Muslims, Dalits, Adivasis and other oppressed sections of the society were clearly visible across the state. The toiling masses of Bihar had begun questioning this rule of terror and anti-people policies forwarded by the BJP government.
Students, workers, teachers, scheme workers and various sections of the society had been on the streets with their demands, but the ruling establishment in the Centre and Bihar were more enthusiastic in unleashing brutal repression against them rather than hearing their voices.

The BJP in Bihar was stalling all positive and progressive developments to further its agenda of communalism and hatred. Across Bihar, BJP-Sangh network had been continuously attempting to sow seeds of hatred and communal violence. Realising this, Nitish Kumar’s JD(U) has now broken out of the chains.

Under the circumstances, the current political realignment has ignited a new hope among the people. Historically, Bihar had always paved for new democratic aspirations and this new political development has sent a clear message that politics of hatred and violence will not be tolerated.

Speaking about the situation, CPIML General Secretary Dipankar Bhattacharya said, “This political development in Bihar to protect people's rights against the BJP's incessant attacks on the Constitution and democracy and attempts to impose autocracy in the country will give the entire country a new direction and will prepare the base for a new political polarization.” He further added that, “Even BJP's alliance partners have become fearful of its extreme greed for power, desperation to destroy all parties and impose a single party system in the country, and relentless attacks on freedom of expression.”

Mahagathbandhan (Grand alliance) which is a major constituent in the new political dynamics represent the aspiration of people’s agenda. In the alliance, CPIML is the fourth largest party with 12 MLAs and had been in the forefront of all movements and struggles for justice and rights. With the outside support to the new government, CPIML will endeavour to provide all advice and help to implement progressive demands and at the same time, will act as a bridge to further people’s demands and aspirations.

The party has called for a common minimum programme from the government to implement pro-people policies. CPIML has reiterated that the three cardinal points for social development in Bihar are – education, employment and land reforms. The new government needs to provide more public investment in education sector and strengthen the network of public education – from primary to higher levels. The corruption and lackadaisical attitude in education system needs to be fixed.

Land and housing rights are some of the major demands of Bihar. More than one crore people are under constant threat of evictions. The government must conduct a survey to look into this issue and new housing rights law should be introduced to provide land and housing for all. For the development of agriculture, the government provide support and registration of share croppers. The land reforms and redistribution of land to poor will help in furthering the agricultural income for poor and agricultural production.

The small and medium scale agro-based industries like paper mills, rice mills etc., need to be restarted. This will provide immense employment opportunities for the people of Bihar. The support and expertise from the government will also ensure compliance and implementation of environmental requirements in these industries.

The new political scenario in Bihar paves way for the implementation of people’s demand that was once stalled by the BJP-Sangh. CPIML, which is part of the new political dynamics, will ensure the banner of people’s movement and aspirations keeps flying high. 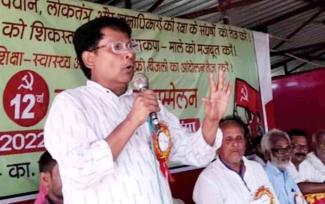