Atul Sati had spearheading two major movements in Joshimath – the Ghasiyari movement in Helang against forest land grab and the 65-day-long movement against the closing down of the Rajiv Gandhi Abhinav Residential School.

CPIML Uttarakhand State Secretary Raja Bahuguna said, “Democracy means a system that runs on dialogue with everyone, even dissenting voices. Placing police guards in front of a person's house just because of political differences is an undemocratic and autocratic action that cannot be accepted under any circumstances.”

“Any attempt to crush voices of opposition and freedom of expression are bound to fail in face of determined people’s struggles,” noted CPIML leader Indresh Maikhuri. 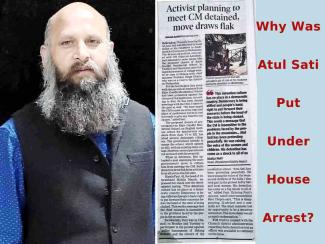