Gustavo Petro and Francia Marquez of the Historic Pact Coalition made history by winning the elections in Colombia on June 19, 2022 and were elected the President and Vice-President. Rodolfo Hernandez, the opposition candidate, lost by more than 700,000 votes. When the results were announced, Francia Marquez said, "After 214 years we finally have a government of the people - a people’s government, a government of people with calloused hands, a government of ordinary people."

The Historic Pact Coalition was formed in February 2021 and as the name signifies it is a coalition of political parties and social movements like Humane Colombia, Patriotic Union formed by the Communist Party, The Commons (a political party founded by the former members of Revolutionary Armed Forces of Columbia-People's Army (FARC- EP), Alternative Indigenous and Social Movement, We are all Colombia and other groups belonging to the  broad left. The Historic Pact Coalition has 63/108 seats in the Senate (upper house) and 114/186 seats in the House of Representatives (lower house).

Petro who is from the Humane Colombia party was a former member of a guerilla group M-19 which was formed to fight the corrupt electoral system in Colombia, he has been a senator, a mayor and an anti-corruption activist. Marquez, the Vice- President, an Afro-Colombian and a well known environmental activist was born in a family of peasants and miners. She has worked against illegal mining and has received several death threats. Colombia is considered the second most dangerous country in the world for environmental activists. Hernandez the defeated candidate is a former mayor, a wealthy business man who was in the construction industry. He once expressed that he was a follower of Hitler, he has been an admirer of Nayib Bukele the president of El Salvador who is implementing neoliberal reforms and has unleashed several repressive measures against labour unions and other activists.

There have been some significant changes on the ground since the elections. On November 3, the Colombian parliament approved the "Total Peace Law". This will enable the government to undertake negotiations with the Revolutionary Armed Forces of Colombia (FARC) and Colombian National Liberation Army (ELN). Both these groups were founded in 1964 inspired by the Cuban revolution to fight the oppressive Columbian government supported by the USA

There has been a drastic reorientation of foreign policy with Petro urging Latin American countries to work together leaving aside their differences. "Let us understand once and for all that there is much more that unites us than what separates us and together we are stronger". The border between Colombia and Venezuela was reopened on September 26 after 7 years of its closure with a lot of jubilation from people on both sides. In 2019, Venezuela broke off diplomatic relations with Colombia when the government previously headed by Ivan Duque joined the United States in recognizing opposition leader Juan Guaido as the president of Venezuela in an effort to bring down the elected government of Nicolas Maduro. Political leaders from the ruling coalition in Colombia now are holding meetings to restore economic relations and rebuild bilateral trade.

One important undertaking by Petro's government has been to restore the ownership of  the Venezuelan petrochemical company Monomeros supplying fertilizers to Colombia back to the Venezuelan government. The U.S. puppet government of Duque (2018-2022) had handed over this public company of Venezuela to the opposition for 3 years. The U.S has many sanctions against Venezuela in place, it remains to be seen if sanctions will be imposed against Monomeros at this time. Colombia would like Monomeros to supply fertilizers at a discounted rate. Petro had said in his election campaign that one of the important tasks of his government would be to address the nationwide hunger, any decrease in fertilizer prices likely will lower the food prices which can provide immediate benefits to roughly 45% of the Colombian population living in poverty.

The government has announced meetings to discuss minimum wage with employers and workers and an agreement will be reached by December 30, 2022. Gloria Ines Ramirez a former trade union leader, prominent human rights defender and a member of the Colombian Communist Party (which is a coalition partner), has been appointed as the Labour Minister. The mainstream press has been highly critical of her open admiration for the late Hugo Chavez and his policies which had significantly improved material conditions for the poor in Venezuela.

The GDP of Colombia is around 315 billion U.S. dollars. According to the Institute of Policy Studies, 4740 individuals in Colombia had a combined net worth totaling 104 billion dollars, while representing 0.009% of the population they hold 17.3% of the country's wealth. The government is getting ready to pass a wealth tax package on January 1, 2023 that will increase annual revenue by 4 billion dollars to fund public spending measures. This was one of the electoral promises of Petro.

Colombia's history is replete with exploitation of its rich resources. The Spanish invaders in the early 16th century pillaged gold and silver. Transnational corporations after independence from Spain working with the national bourgeoisie have extracted minerals, oil and other natural resources causing untold suffering to its people. According to the Indigenous Peoples Human Rights Commission, just between 1985 and 2017, 9148 indigenous leaders have been murdered by paramilitary organizations and others linked to the Colombian state while attempting to defend their territories. While U.S. imperialism has interfered in many countries in Latin America, Colombia has received the lion's share of military aid. The U.S. has 7 military bases in the country. Colombia is the first Latin American country to become a member of NATO, a reward for its collaboration with the U.S. The US Army in the early 1960s formulated Plan Lazo to develop paramilitary and counter-insurgency forces in Colombia to attack the many peasant autonomous committees that had sprung up in the countryside with links to the Communist Party of Colombia. These committees were mounting spirited  struggles against the landed bourgeoisie and the Columbian state.

Successive governments in the U.S. led by both the Democrats and Republicans have implemented one plan after another to continue to influence the Columbian government's economic, social and political policies. Plan Columbia in 1999 was implemented with 6-9 billion dollars to be provided over a 10 year period ostensibly to stop the illegal cocaine trade. Oil companies like Occidental, Exxon-Mobil, Texaco, BP Amoco spent millions of dollars to influence U.S. policy in Colombia for counter-insurgency operations in the face of resistance from FARC and other groups who were resisting land grab and forceful eviction of peasants. In the important book 'Cocaine, Death Squads and The War on Terror', Olivar Villar and Drew Cottle write about the collusion of the Colombian state and narco traffickers. On the one hand small coca (the raw crop)  farmers lands have been devastated by biological warfare as part of the 'war on drugs' while the cocaine (illegally processed coca) cartels with links to the Colombian state and U.S. agencies have flourished with billions of dollars being laundered to Wall Street banks and financial institutions. Millions of peasants have been evicted to enable the takeover of their lands by multinational corporations for oil and mineral extraction. Canadian mineral corporations increased their assets from 30 billion dollars in 2005 to 210 billion dollars in 2015.

Revolutionary Armed Forces of Colombia—People’s Army (FARC-EP) and the Colombian President Santos signed a peace deal in Havana in 2016 with the goal to end 50 years of civil war. Repression and attacks against activists however did not abate. According to the Institute for Studies in Development and Peace, 930 social activists and 245 ex-combatants of FARC were assassinated after the peace accord was signed in 2016.

Colombia witnessed a massive general strike called by its major trade unions in November 2019 where 25 million participated in shutting down the country when the unpopular government of Duque tried to lower pensions and minimum wages. In April 2021, when the same government tried to pass a tax reform bill that would have increased the prices of goods, a massive movement erupted in 23 cities across Colombia and the bill was withdrawn.

The victory of the Historic Pact Coalition has brought hope and joy to millions of poor Colombians who have been historically Marginalized. This victory symbolizes their aspirations for a better future. Petro's government however faces huge challenges, the Colombian army with its long record of human rights abuses is still under the control of the right wing, the brutal paramilitary forces who have been recipients of assistance from U.S. agencies continue to be armed and all the capitalist structures remain in place. The Colombian people will need to continue to organize militant struggles against the oligarchy and their collaborators in the United States for a radical transformation of their society. As they say in Latin America "La Lucha Continua - The Struggle Continues". 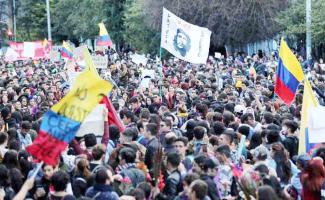