A state-level conference of sanitation workers (powrakarmikas) was held on 06.11.2022 at Ambedkar Bhavan in Bangalore by the BBMP Pourakarmika Sangha, Karnataka Pragathipara Pourakarmika Sangha, Karnataka Pragathipara Tajya Sagisuva Vahana Chalakara Matthu Sahayakara Sangha (all affiliated with AICCTU), demanding that all powrakarmikas in the state be made permanent. Thousands of powrakarmikas participated in this convention.

In the conference, the President of the BBMP Powrakarmika Sangha, Com. Nirmala said that an indefinite protest was organised in July, 2022, demanding permanent employment and other basic facilities for all the powrakarmikas of the state. At that time, the Chief Minister of the State had promised in writing to make permanent the powrakarmikas working in all the local bodies across the State and had also constituted a committee for the same. But before the report of the committee could be finalised, the government announced that only 11,000 powrakarmikas will be recruited across the state, whereas there are more than 48,000 powrakarmikas are presently working. Thus, she demanded that all the powrakarmikas should be made permanent immediately. She said that they are holding this state-level conference to send a warning to the government that they will launch a massive struggle for the permanent status of the powrakamikas in the coming days.

Com. Keshav Nayak, general secretary of the SWM auto-drivers and helpers union, demanded that the government immediately treat all drivers and helpers as powrakarmikas. “In all the urban local bodies of the state, even today, vehicle drivers and helpers are employed under the sham contract system and are not provided with any service facilities as required by law,” he said and added that due to this, these workers are facing severe hardships.

AICCTU State President Clifton D’Rozario said that for centuries now, the society has thrusted brooms into the hands of Dalits to ensure they only sweep garbage. “The government is hell-bent upon continuing this caste-based profession. We should not allow it and we need to be careful that the children of our powrakarmikas do not sweep roads and collect garbage. And for that, the government must provide free education to all the children of powrakarmikas,” he said.

Several powrakarmikas who participated in the convention spoke and shared the hardships they were facing and vowed to gear up for a massive struggle to make their jobs permanent. 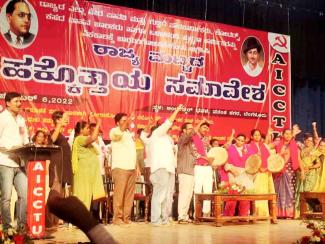