Lula da Silva, the former President and Workers’ Party (PT) candidate, won the Brazilian presidency with a narrow margin in the runoff election held on October 30th, 2022. The current President Jair Bolsonaro, known as the “Brazilian Trump,” received 49.10%. In Brazil, a presidential candidate needs more than 50% of the vote to win the election. On October 2nd, Lula received 48.4% of the votes, thus, necessitating the runoff election.

Pandemic and the Brazilian Economy

Brazil is the largest country in Latin America with a population of 217 million and a nominal gross domestic product (GDP) of $ 1.8 Trillion making it the 12th largest economy in the world. According to a recent World Bank report on Brazil, COVID-19 wreaked havoc on the people and its economy. Brazil had more than 35 million diagnosed cases with more than 688,000 deaths. Even before the pandemic, 30% of Brazilians were poor and about 8% lived in extreme poverty. The inequality in Brazil has staggering disparities where 30% of the poor are Afro-Brazilian women living in urban areas. While 75% of all children living in rural areas are poor. The pandemic has lowered household income with the most vulnerable 40% of the population being severely impacted.

The economic inequality in Brazil is such that the six richest men have the same wealth as the poorest 50 % of the population. The richest 5 % have the same income as the remaining 95 %[1]. These disparities exist in a country that is the world’s largest producer of soy and orange and a major producer of corn, beef, turkey and chicken. The country’s trade has become dependent on agribusiness and mining that Brazilian capitalists dominate. Brazil has the second-largest manufacturing sector in the Americas with industries such as automobiles, steel and petrochemicals. Automobile sector is dominated by foreign multinationals.[2]

The Major Candidates - Bolsonaro and Lula

Bolsonaro, a former army paratrooper who rose to the rank of captain, has been a major admirer of Brazil’s military dictatorship that ruled the country from 1964-1985. He has said that the military dictatorship during its 30 years rule “should have killed more people.” Bolsonaro is an unabashed Trump admirer and openly denigrates women, indigenous and LGBTQ+ people.

The alliance that had backed Bolsanaro comes from three sectors: Agribusiness, evangelical Christians, and the security forces, specifically the military and the police. It is colloquially referred to as BBB – beef, Bible, and the bullet[3]. This authoritarian style of neoliberalism also has the judiciary as a key ally. Christian evangelicals have grown from 6.6 % of the population in 1980 to 22.2 % in 2010 [4].

Around 8% of the population identify themselves as African and more than 43% identify themselves as mixed race. The police violence against the Afro-Brazilian community is widespread which has led to the Black Lives Matter movement in Brazil. Bolsonaro had also been targeting the more than 300 indigenous communities of Brazil. He was planning to build hydroelectric dam projects and hyper-accelerating the deforestation of the Amazon.

According to Brazil’s National Institute for Space Research (INPE), almost 16,000 square miles of the Amazon were deforested under Bolsonaro’s presidency. His disdain for the environment and the climate crisis is well known. According to some estimates, between 17 to 20 percent of the Amazon has been destroyed in the past fifty years. Saving the Amazon is imperative to address the planetary climate crisis as it produces between six and nine percent of the world’s total oxygen and acts as a massive carbon sink[5].

In his first two terms in office, Lula fought against deforestation. He has pledged to crack down on illegal mining and logging as well as to revive the Amazon Fund, which is meant to protect the rainforest.

Lula’s strongest support is among the poor, rural voters in the northeast part of Brazil. PT and its allies in trade unions and social movements play a key role in political mobilization.

During Lula’s first two terms in office, he pushed massive infrastructure programmes and direct cash transfers. Social welfare policies, falling unemployment, and increase in the minimum wage contributed to a brief period of income redistribution. He succeeded in lowering Brazil’s poverty index by 20% during his two terms as president from 2003-2010.

Bolsa Família is a monthly cash transfer programme to mothers in the lowest income bracket as a reward for sending their children to school and getting their health checked. The payments are very small though – $12 per child, or an average $35 a month. Bolsa Família was a mere 0.5 per cent of GDP[6].

The nature of neoliberal policies changed under Lula when he placed restrictions on private land purchases by non-Brazilian capitalists. It did not curtail foreign investment, instead, the multinational interests shifted to sectors like oil and gas. Brazil has continued to be dependent on agribusiness, oil and mining exports for foreign reserves as well as to pay foreign debt obligations. A lot of the social welfare policies have been financed by higher revenues accruing from growth and high commodity prices. The PT has continued with the neoliberal policies and thus have not been able to address structural causes of inequality. The trade unions were 30% of the formal labour force (1980s) and that number has fallen to 17 % (2011).

The Brazilian elite and the leaders in the Congress, who were actively supporting the 2016 coup and the 2018 legal wrangling that imprisoned Lula, have congratulated him. Globally, the imperialist countries have also welcomed the result of the elections. This does not reflect any shift in their policies though, it is just an attempt to bring some socio-political stability to Brazil which was on the verge of chaos during the Bolsonaro government.

Lula’s presidency will hopefully bring some reprieve to Cuba and Venezuela that have been severely impacted by draconian US sanctions. It also provides an opportunity for social democratic governments in large countries such as Mexico, Colombia, Peru, and Argentina to try and build a Latin American alliance. Brazil, in Lula’s previous term, had been active in BRICS and this will provide an opportunity to strengthen that forum.

Social movements, labour unions, indigenous organizations and other movements will have to build on this victory and push for progressive policies and programmes. Organizations like the Landless Rural Workers’ Movement (MST) are planning to push for food sovereignty and land reforms for the landless. The trade unions will have to launch new campaigns and movements if they want to stop the decline in unionization. These movements and their achievements will shape the path forward for Brazil. 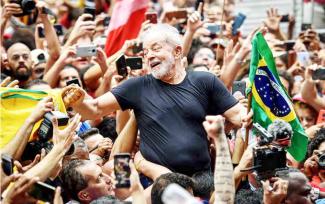